Blackwater Rafting
(This was compiled from other websites.  We weren't allowed to take photos here, but we are in the group pose on the left)  Bruce was told of this adventure 10 years ago from his friend John Ross, and has been on the "to do" list ever since.

Reality is a poor cousin to imagination. In my mind I am floating beneath a subterranean galaxy, constellations of light pin-pricking the perfect darkness. 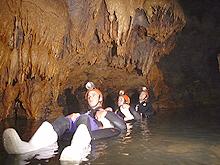 Lying back, gazing into space, I am transported to clear starry nights in the outback.

The reality is that I am 50 metres underground, cold, shivering and wet, staring at the phosphorescent bums of maggots (better known to the marketer's pen as glow-worms).

My head-torch is off and I am a shadow within shadows, drifting on the subterranean stream. The blue glow of the insects spreads across the water. Norm, our guide, wades on, towing a conga line of inner tubes, our feet tucked under the armpits of the person in front.

Regardless of reality, it is a sedate interlude to the day's more intense start and finish.

"I can't do it. I'm scared. Look, I'm crying already," New York honeymooner Sylvie had sobbed back at the cave entrance. The narrow opening to Ruakuri Cave was a dark gash in the earth, widening unseen into a 35-metre-deep hole.

Rain fell around us, running from the sharp origami folds of the New Zealand hillsides, funnelling into

the multitude of cave entrances punched into the karst landscape, a disappearing act that gave the area its name. Wai is a Maori word for water, tomo means enter: Waitomo, the place where water enters the ground.

Canadian teenagers Scott and Brianna abseiled into the cave first with the invincibility of youth. Their confidence had little effect on Sylvie, who backed away from the cave as though it was a whirlpool that would suck her down.

Her misconception was reasonable because Black Water Rafting is not a description, it is a trademark. It involves neither a raft nor black water. The generic name for this uniquely New Zealand experience is cave tubing, but by virtue of being its inceptor 15 years ago, Black Water Rafting secured a name now synonymous with the activity.

In its purest form cave tubing is straightforward. You sit in an inner tube and float along a subterranean stream. But in the battle for adventure supremacy, cave tubing has evolved into a climbing, abseiling, tubing, crawling, sliding, walking, wading and swimming affair (though it is still available in its basic form). 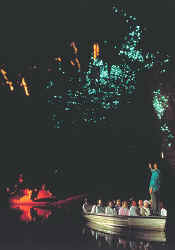 It is now possible to abseil 100 metres into a cave, or make multiple abseils with any of four companies offering cave tubing in Waitomo, as well as another two companies on the South Island.

Deep below the earth we wait for Sylvie, who has decided to make the abseil so long as Norm descends beside her. A preliminary search of the cave reveals a pile of bones in a side chamber.

"What do you think they're from?" Scott asks.

"The last group," somebody quips, though they are the bones of a cow drawn too close to the cave by its lush entrance rim.

Sylvie arrives to the applause of half a dozen, which echoes through the cave into the ovation of a concert hall.

A short walk and we are back on a rope, clipped into a flying fox that descends from one limestone platform to another. Head torches are extinguished and in the pure darkness we leap into the unknown. Glow-worms scud overhead, a meteor shower in inner space. 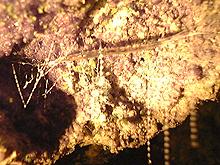 I hesitate to use these galactic similes, for they imply only that the glow-worms resemble stars, when they are, in fact, the exact image of a night sky.

Star-like, no, starry, yes. Later, as Norm tows the conga line through the eternal underground night he reveals the truth about glow-worms.

"What they are is the larvae of a sort of fly called the fungus gnat, which makes them ¤ what?"

"Right, maggots. But if we called them glow-maggots we'd have a hard time getting anybody to Waitomo, so they're called glow-worms."

The glow-worm's blue light serves two purposes. It burns their waste matter (They can't crap, Norm says) and it lures small insects into their webs, which hang around them like strings of pearls.

Thirdly, it makes a pyrotechnic spectacular. More so when Norm slaps his inner tube against the water, issuing a recoil like a shotgun. Sensing movement and food, the glow-worms flare brighter.

Norm tows us deeper, back the way we have come, back finally to the point where we had leapt into the stream, a four-metre plunge into an icy pool, all hoping not to land on the two-metre eel patrolling slowly under the surface.

The eels will only trouble you if you have a hole in your boots," Norm joked. Three or four of us pointed to holes in our boots.

We dump our inner tubes on the rock ledge above the stream. It is now a pure caving exercise to find our way out. We wade downstream, slither down a small waterfall on our stomachs and slither again beneath sunken ceilings. At one point a draft rushes through a corridor.

"There's an exit around here somewhere," I predict, but there is not.

The tunnels twist and turn so much I am no longer certain if we are on the North or South Island, until finally we come to a junction. Norm outlines our choice, the Path of Tranquillity or the Twin Waterfalls of Doom.

All fingers point in the direction of the waterfalls, except one. Sylvie is outvoted.

As we make the final climb, I hear a shriek behind me: "I'm falling". It is not Sylvie, but Jennifer, a confident climber. When I turn I can see her light, meaning she has not fallen. Van, the second guide, has caught her as she rocked backward off the waterfall.

At the top of the waterfall, natural light streams into the cave. We return to planet earth.

"Who were those other people?" Scott asks as we stroll back to the van, referring to another group we passed underground.

Norm explains they were doing a less adventurous route, missing the abseil, flying fox and the waterfalls.

"They're the wimps," Sylvie says proudly.